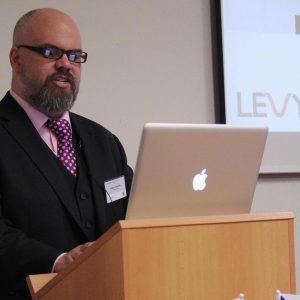 “Religion, a Cultural Virus: Evolutionary Approaches in the Historical, Anthropological, and Scientific Study of Religion”

William “Lee” W. McCorkle Jr. is a cognitive and evolutionary anthropologist that specializes in ritual, language, and communication. He served as the Director for the Laboratory of the Experimental Research of Religion (www.levyna.cz) and Associate Professor in the Department for the Study of Religions at Masaryk University from 2011-2013. He is the managing editor for the Journal of Cognitive Historiography (Equinox), and is a co-editor, along with Luther H. Martin and Donald Wiebe, for the “Science and Religion” academic book series with Bloomsbury Publishing. His books include Ritualizing the Disposal of the Deceased: From Corpse to Concept (2010), and the co-edited volume Mental Culture: Classical Social Theory and the Cognitive Science of Religion (2013) He is also a Distinguished Fellow at the University of Aarhus and currently a Senior Research Fellow at LEVYNA. Dr. McCorkle’s latest research includes a robust program of connecting institutional centers internationally into a collaborative research agenda, including the foundations for “innovative methodologies” in cognitive historiography, cognitive science of culture, economic and behavioral games, developmental and evolutionary psychology, learning and creativity, eye-tracking and movement, sound and synchrony, and an overall research focus on experimental anthropology (both in the field and in the lab).