PhD student Michael Fedoroff has received a Civilian Service Achievement Medal from the Department of the Army for his work leading an interagency team of investigators to prosecute a ring of thieves that were looting Choctaw and Chickasaw ancestral sites on Army Property in Mississippi. He writes, “It was a team effort that I just happened to lead. We had seven felony convictions [under the Archaeological Resources Protection Act (ARPA)] (the first such in the State of Mississippi), and we sent all involved to prison. I led the fieldwork and forensic reporting in addition to interagency coordination. The Tribes were very happy and I accepted this award also on their behalf as well as my own.” 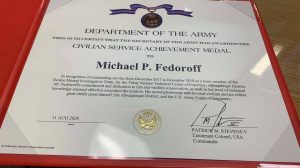