Congratulations to Dr. Bill Dressler on his newly released book, Culture and the Individual: Theory and Method of Cultural Consonance, published by Rutledge Press. 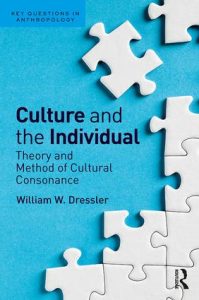 Culture and the Individual
Theory and Method of Cultural Consonance

This book engages with the issue of how culture is incorporated into individuals’ lives, a question that has long plagued the social sciences. Starting with a critical overview of the treatment of culture and the individual in anthropology, the author makes the case for adopting a cognitive theory of culture in researching the relationship. The concept of cultural consonance is introduced as a solution and placed in theoretical context. Cultural consonance is defined as the degree to which individuals incorporate into their own beliefs and behaviors the prototypes for belief and behavior encoded in shared cultural models. Dressler examines how this can be measured and what it can reveal, focusing in particular on the field of health.