Look who’s featured on the cover of the current issue of American Archaeology—our own Dr. Alex Tokovinine! His contribution to the 3-D scanning project of the world-famous Copan Hieroglyphic Stairway is described on p. 23:
“…In 2007, Fast [William Fasho, Bowditch Professor at Harvard University] hired post-doctoral student Alexandre Tokovinine to conduct on-site trials. They were successful, and in 2008 Tokovinine began 3-D scanning at Copan.‘We had a pretty disastrous first field season,’ admitted Tokovinine, who is now an assistant professor at the University of Alabama. He had to ensure the safety of his team (a missed step could result in a bad fall), the stairway (they worked in sock feet to avoid damaging the steps), and the scanner (dropping the equipment would have ended the project). On top of these challenges, Tokovinine came down with malaria and dengue fever and had to be airlifted to a hospital in Miami.”
We’re glad your better now Alex!  Congratulations on your terrific project and on the wonderful press it’s receiving. 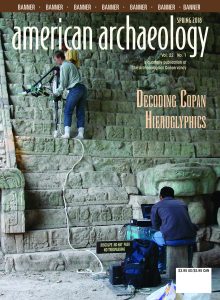