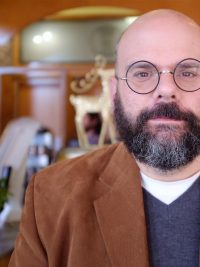 I am a second year Master’s student with a focus on Cognitive Anthropology. An interest in liminal stages of development led to my current research on cultural models of retirement and aging, identifying correlations between the cultural domain of aging, health outcomes, and self-narrative.

I received my undergraduate degree from New College, where I studied mythic and religious narratives in culture. During my time in New College, I founded the Mythic Roundtable, a faculty and student comprised discussion group centered around topics of myth, magic, and ritual. In 2015, my research on “Iconography of the Southeastern Ceremonial Complex: Tracing the Mono-myth of the Heroic Twins” earned the Randall Outstanding Undergraduate Research Award.

I currently serve as the Vice President of the Anthropology Club. My interests outside of anthropology include myth, religion, folk psychology, and photography. In a previous life, I spent my days as a luthier.