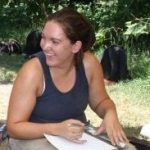 I received a B.S. in Anthropology, with minors in Archaeology and Native American Studies, from Middle Tennessee State University in 2008.  As an undergraduate at this institution I was afforded several unique opportunities including working as a student researcher on the Hermitage Springs Historic Cemetery Project (under the direction of Dr. Shannon Hodge); positions as first a crew member and, later, a crew chief on the Castalian Springs Archaeological Project, a Mississippian mound site in Middle Tennessee (under the direction of Dr. Kevin Smith); and as member of the Forensic Anthropology Search and Recovery Team (under the direction of Dr. Hugh Berryman), an aspect of the MTSU Forensic Institute for Research and Education.

I received a M.A. in Anthropology from the University of Southern Mississippi in 2011.  As a graduate student at USM I had the unbelievable good luck of again becoming involved with a wide variety of projects in both bioarchaeology (under the direction of Dr. Marie Danforth) and archaeology (under the direction of Dr. Ed Jackson) including the inventory and analysis of individuals from a Mexican-American war cemetery; an assessment of the prevalence of Klippel-Feil Syndrome (a congenital disease) in the prehistoric Southeast; as a crew member on the Winterville Archaeological Project, a Mississippian mound center located outside of Greenville, MS; and as a field technician on the Grand Bay Archaeological Project, in the Grand Bay National Estuarine Research Reserve, Pascagoula, MS.  My master’s thesis examined the health experiences of early eighteenth century European immigrants to the Mississippi Gulf Coast from an analysis of the remains of thirty adults recovered from the Moran French Colonial Cemetery in Biloxi, MS.

I am a first year PhD student at Alabama and an advisee of Dr. Keith Jacobi.  My current research interests include the early Mississippian period at Moundville and paleopathology with an emphasis on congenital disease, the etiology of Harris Lines, and skeletal manifestations of anemia. 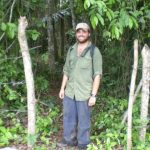 I am a long time resident of Tuscaloosa County and received my B.A. in Anthropology from the University of Alabama in 2012. During my undergraduate years, I quickly became interested in archaeology and spent a lot of time volunteering or working in the Gulf Coast Survey Lab and the Archaeology lab in ten Hoor. In 2010 I attended the University’s field school that was held at Asphalt Plant Mound located one mile north of Moundville. During the summer of 2011 I was fortunate enough to spend a month in Belize at the Ancient Mayan site of Actuncan. There I assisted Chet Walker of Archgeophysical Survey, LLC. in a magnetometer survey covering a large portion of the site. While I did not develop a great interest in Mayan archaeology, I did find an interest in magnetometry, other remote sensing, and its application to archaeology. Besides remote sensing I am also interested in Southeastern U.S. Archaeology, Mississippian societies, and the European contact period.