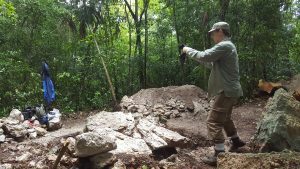 Dr. Alexandre Tokovinine’s recent work on warfare in the Maya lowlands has been profiled in the New York Times and UA News. As the UA News Center explains:

An anthropologist at The University of Alabama is part of a team of researchers who show brutal warfare in Mayan civilizations occurred earlier than previously thought.

Evidence of extreme warfare tactics in the Maya lowlands, during a time described as a peak in prosperity and artistic sophistication, is described in a paper published online this week in Nature Human Behaviour. This research suggests the Maya engaged in violent warfare that resulted in widespread destruction of a city much earlier than previously thought.